We first headed north from Sydney and went up to Rockhampton via the New England Highway, Bundaberg, and a visit to the Great Barrier Reef at Lady Musgrave Island. Then we turned inland via the Capricorn and Landsborough Highways to Longreach. There we observed and photographed the transit of Venus.

We continued west from Longreach and the Barkly Highway to Tennant Creek. At one point on a 100 km stretch of road we counted more dead kangaroos than passing vehicles! From Tennant Creek we headed south on the Stuart highway to Alice Springs which became our base for more than a week. While in Alice, we visited and hiked in the East and West McDonnell National Parks, Kings Canyon, Finke Gorge NP, walked around Uluru (aka Ayers Rock), though the Olgas.

We left Alice, still on the Stuart Highway, went through Coober Pedy, continued to Port Augusta, and then up to the Flinders Ranges NP where we spent another few days. It was here that we were rained on (and heavily) for the first time on the trip. We decided not to go further south to Victoria as originally planned since the weather there was predicted to be not conducive to hiking.

From Hawker near the Flinders Ranges we took a small by-road and turned back east along the Barrier Highway towards Sydney. At Dubbo we realized we couldn't bypass Parkes and its famous radio observatory. It was a worthwhile side trip. Then driving though Orange and Bathurst, we spent the night in Lithgow where the temperature was below freezing at night. Finally we came down off the Great Barrier Range and headed into Sydney for a couple of days before returning to the US.

The images in this section are divided into several galleries, each of which is loosely connected to a theme or topic. Several of the images appear in more than one gallery.

Uluru and the Olgas 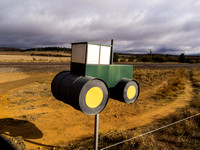 Kings Canyon and the MacDonnell Ranges

The Land and the Barrier Reef 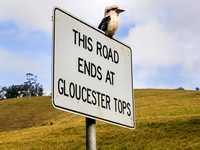